I often overhear people saying “I was so depressed yesterday after watching that movie” or “my insomnia is so bad I’ve been up until midnight the last three nights”.

These need to stop. 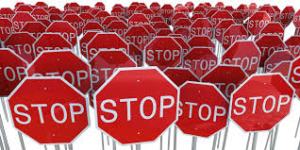 I started thinking about this after reading a blog post earlier today. Go check it out, it’s an awesome blog.

Depression is not a short term sadness after viewing something sad. That is just being sad. Everyone gets sad every once in a while. Sadness is something in everyone. Depression, however, is something that lasts a long time, an ongoing fight that is often daily.

Insomnia is going days without sleeping or getting a mere few hours if that. Not getting 7 hours of sleep still cause you pulled a late night. The incapability of falling asleep is something that plagues many, and can be really hard to live with. Even though people with it tend to adjust on their limited hours of sleep lifestyle.

Anxiety is not being anxious before taking a test. (Although it can be) Anxiety is when the thought of getting out of bed and interacting with another person terrifies you to the point of immobility. Where answering a phone is the most painful thing that could happen to you.

Bipolar is not just having a wide variety of emotions. Bipolar is having a switch happen inside you that is outside your control. They aren’t just simple mood swings.

Anorexia isn’t just a word to describe someone who is skinny. Or saying “I wish I was anorexic” because it is not an adjective to describe just appearance. It is the mental condition where you are so critical on yourself that you can’t even fathom eating. 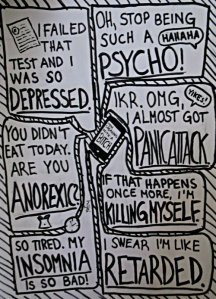 All of these conditions are very real to so many people. And every time they’re thrown around as simple adjectives it makes those who fight feel like they’re being stepped on. It aids in the conversation that mental illnesses are just in your head. It makes the stigma more present. In turn, this causes people to withdraw inside themselves as help becomes harder to ask for.

Often, the people using these adjectives don’t even realize the weight of the words they’re using. Some things are so integrated into culture that you’re raised thinking and speaking a certain way. Using these words as if they are simple adjectives, like how they were explained in the blog post that this was inspired by, is subconscious communication for so many. It’s a habit, and it feels natural. The same way other slurs are used for homophobia or racism. All of these terms shouldn’t be used, yet people still find the words passing between their lips everyday. So educating those who just don’t see things in a certain light is so important. Make sure you think twice before you use these words.

Remember if you fight you are not alone.

And you are loved.